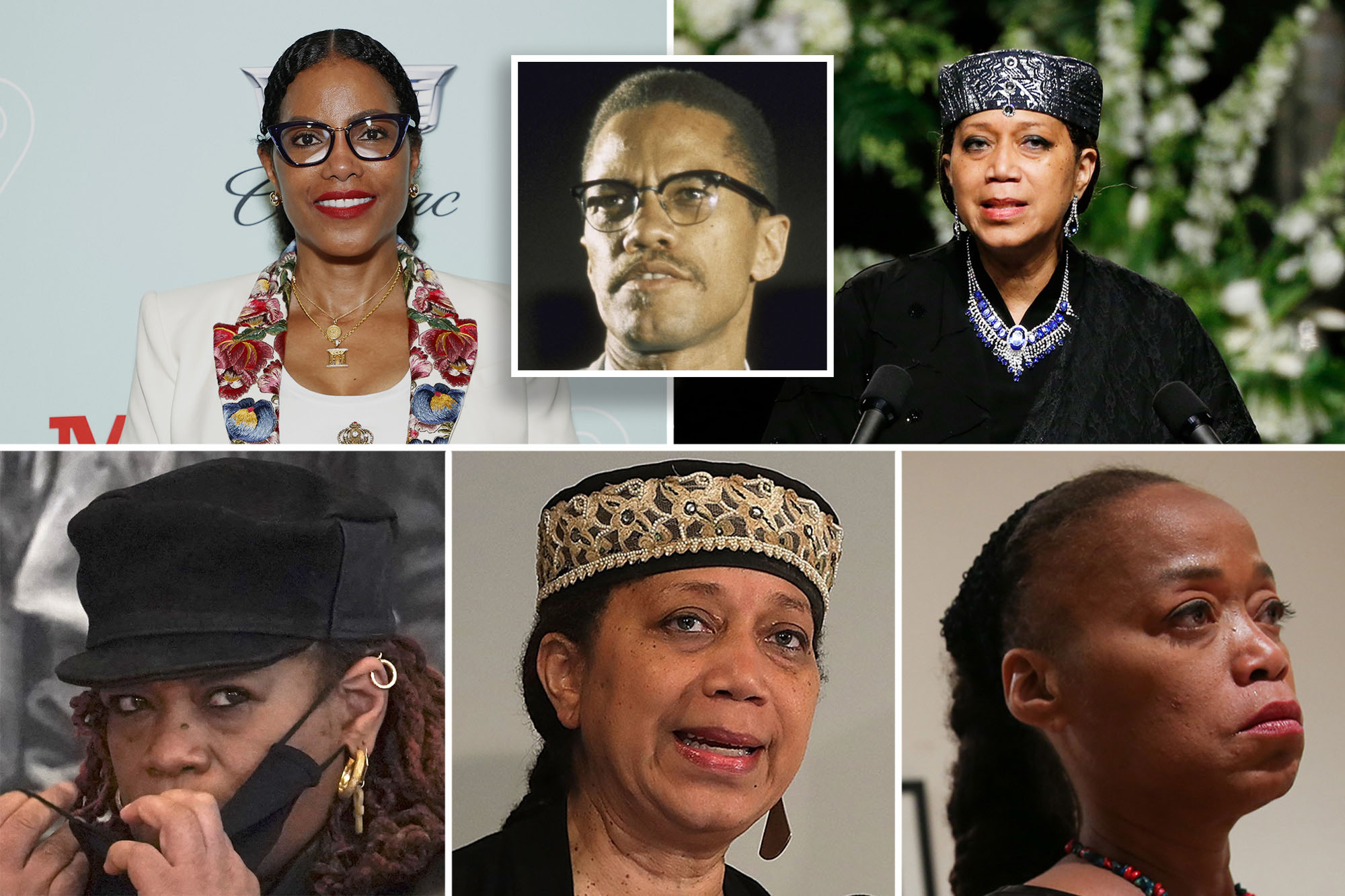 Tragedy has befallen the family of Malcolm X, with one of the civil rights activist’s daughters found dead at her home in Brooklyn.

The body of Malikah Shabazz, 56, was discovered Monday afternoon — just days after two men convicted of killing her famous father were exonerated over his 1965 murder.

Investigators do not suspect foul play, but the news has rocked Malcolm X’s prominent family, who have been in the headlines for more than half a century.

Malikah was one of six daughters that the late activist shared with his wife, Betty Shabazz, who died in 1997.

After Malcolm X’s assassination, the American public took a fervent interest in the lives of Betty and the little girls left behind.

The five surviving daughters of Malcolm X are believed to be devastated by Malikah’s sudden passing on Monday. Sister Iyasah Shabazz told The Post that she was “unable to speak” about the news.

In 2018, all six sisters united to launch Malcolm X Legacy — a clothing line that The New Yorker claimed has “rebranded their father’s message for the pussy-hat era.”

Other than that joint venture, the sisters have not worked together professionally and have lived remarkably varied lives.

Here, the stories of the sisters who grew up in the shadow of tragedy.

Attallah, the oldest of the Shabazz siblings, is perhaps the most prominent of Malcolm X’s children.

The now-63-year-old was just 6 when her father was gunned down inside Manhattan’s Audobon Ballroom, later telling WNBC: “I remember the day and it changed everything.”

Despite the trauma, Attallah went on to attend the elite United Nations International School in Manhattan and studied law at Briarcliff College in upstate New York.

She subsequently returned to the Big Apple, where she forged an unlikely friendship with Yolanda King — the daughter of Martin Luther King Jr.

Although their fathers had been foes, Attallah and Yolanda quickly became close and co-wrote two plays together in the 1980s: “Stepping Into Tomorrow” and “Of One Mind.”

Their collaboration led to the start of Nucleus — a theater troop that crisscrossed the country performing sold-out shows. Attallah became an actress in her own right, appearing in several of the plays.

In 1997, she released her critically-acclaimed memoir, “From Mine Eyes,” and in 2002 she unexpectedly became a diplomat after the prime minister of Belize asked her to serve as ambassador-at-large for the Caribbean country.

She has also spoken at the funerals of Muhammad Ali and Coretta Scott King — the wife of Martin Luther King Jr.

Although she is a prominent public figure, Attallah is fiercely protective of her privacy and has not dished details on her dating life.

Qubilah Shabazz — a life of tragedy and turmoil

Unlike her older sister, Qubilah’s personal life has been splashed across the headlines due to her involvement in a series of tragedies and scandals.

The now-60-year-old was accepted into Princeton University before dropping out after just three semesters.

Qubilah told The New Yorker in 2018 that she found the Ivy League school difficult because her father’s radical reputation preceded her.

“I was supposed to wear a beret and combat boots and dashikis, and when I didn’t arrive that way it was a bit rough,” she stated.

After traveling to Paris, Qubilah took classes at the Sorbonne and met L. A. Bouasba, an Algerian man with whom she had a son, Malcolm Shabazz, born in 1984.

The couple soon split and Qubilah returned to the US with her son, where she worked a series of odd jobs and began drinking heavily.

In 1995 she was arrested by the FBI over an outlandish plot to kill Louis Farrakhan — the leader of the Nation of Islam who had fallen out with Malcolm X prior to his death. Qubilah allegedly believed Farrakhan was involved in her father’s assassination and wanted revenge.

She was indicted on charges of using telephones and crossing state lines as part of the plot but accepted a plea deal, agreeing to seek treatment for drug and alcohol abuse.

Her son Malcolm, then age 10, was sent to live with his grandmother — Betty Shabazz. Shockingly, young Malcolm set fire to Betty’s home, reportedly because he was unhappy living with her.

During the blaze, Betty suffered burns to 80% of her body and she later died in hospital from her injuries.

Qubilah — in treatment at the time — had to deal with the fact her young son was responsible for her own mother’s death.

Malcolm Shabazz served 18 months in juvenile detention on charges of arson and manslaughter.

However, in 2013, tragedy struck again when Malcolm — who was now age 28 — was murdered during a trip to Mexico. Malcolm was badly beaten with a rod during a dispute over a $1,200 bar tab. Three men were arrested and charged with the murder.

Qubilah has kept a low profile in the eight years since her son’s murder. She is believed to be residing in New York.

Ilyasah, now 59, has followed in her oldest sister’s footsteps, publishing books and becoming a public speaker.

She graduated from the elite Hackley School, obtained a bachelor’s degree from SUNY New Paltz and a master’s degree in human resources from Fordham University.

In 2002, she published her memoir “Growing Up X: A Memoir by the Daughter of Malcolm X.” She has also released a children’s book about her mom, titled “Betty Before X.”

She has also slammed singer Nicki Minaj for use of a famous photo of Malcolm X with a rifle in his hands and juxtaposing it with a racial slur for artwork for her 2014 song ‘Looking A–.’”

“This is a family photo that was taken out of context in a totally inaccurate and tasteless way,” Ilyasah said at the time, according to The Hollywood Reporter.

Ilyasah also has a verified Twitter account, boasting more than 68,000 followers. She frequently chimes in on current affairs and social justice issues.

Just last week she lashed out at the Kyle Rittenhouse verdict in a tweet, stating: “Not guilty on all charges? Am I missing something?”

Last week, she also shared an old photo of her late mom and three of her sisters taken shortly after her dad’s death.

“Find the good and praise it,” she wrote above the snap.

When contacted by The Post on Tuesday, in the wake of her younger sister’s shocking death, a devastated-sounding Ilyasah said she was “unable to talk.”

Gamilah, 57, is the most private of Malcolm X’s five living daughters.

She does not have a public Twitter or Instagram profile and has not published any memoirs detailing her status as the daughter of one of America’s most noted civil rights activists.

Malaak Shabazz — inspired by the father she never knew

Malaak, 56, is the twin sister of Malikah Shabazz, who was found dead at her home on Monday. The pair were born seven months after Malcolm X’s assassination.

Despite never knowing her father, Malaak has been heavily inspired by his legacy and is a self-described “human rights activist,” according to Heavy.

Back in 2015, she spoke to the French outlet France 24 on the 50th anniversary of her father’s death.

“My father wore his religion in his back pocket. He didn’t push that on anyone… He was very much a Muslim, but he was also black,” she stated.

“Frankly, I don’t think things would be this bad if he was still alive. He was an advocate in every country. If he heard about it, he was there. I think today, he would be the Mandela, be the Kofi Annan, who they called on. There’s really nobody to do that. But it was his passion to make sure injustice was heard,” she said.